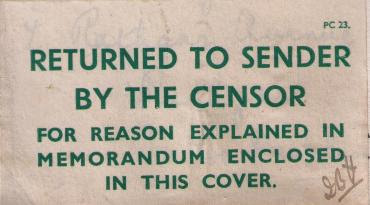 As a result of war conditions, correspondence to foreign destinations was subject to the conditions laid down by the Censorship authorities. Items which did not comply with censorship regulations were returned to the senders with enclosed memoranda explaining why the item had not been despatched.
A few such censorship memoranda are shown in this post.

Two memoranda were enclosed in the cover below mailed to Italy on September 29, 1939 and returned to the sender. The memoranda indicate that the letter, written in French, was too lengthy and not clearly written. 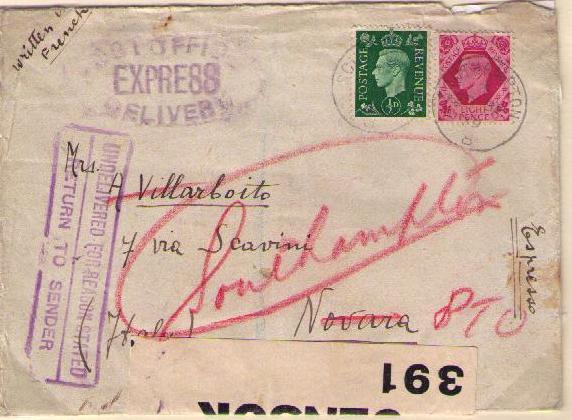 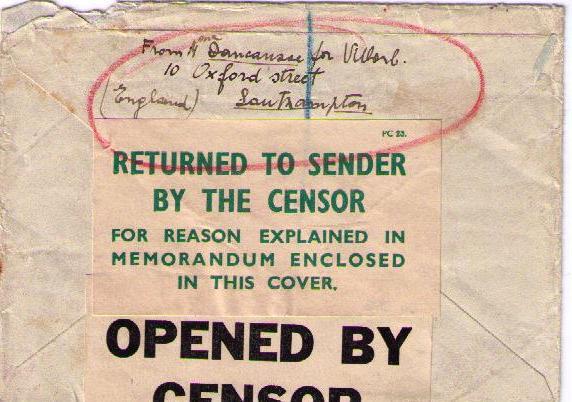 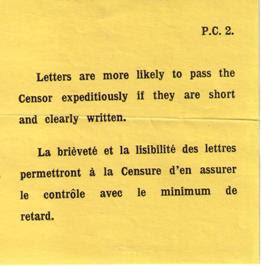 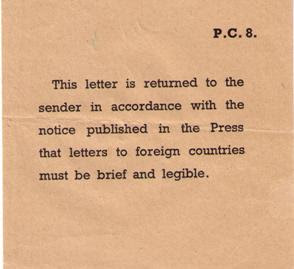 This letter is returned to the sender in accordance with the notice published in the Press that letters to foreign countries mus be brief and legible.

The despatch of illustrated items to certain countries was prohibited. 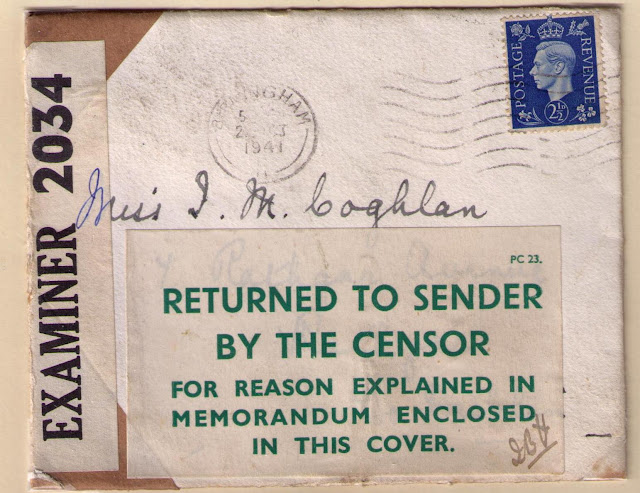 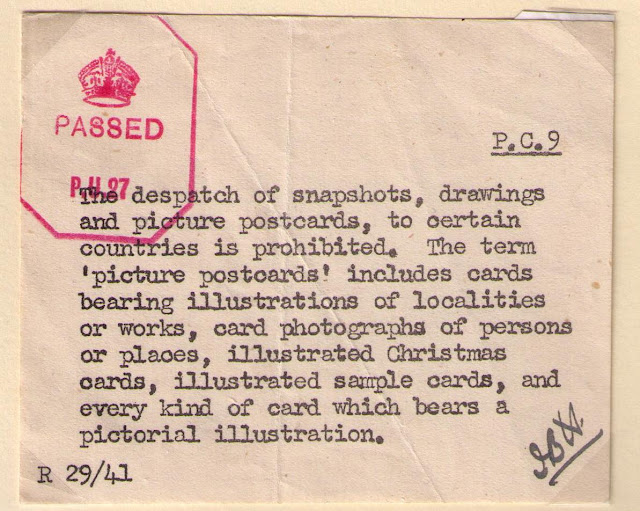 The despatch of snapshots, drawings and picture postcards, to certain countries is prohibited. The term 'picture postcards' includes cards bearing illustrations of localities or works, card photographs of persons or places, illustrated Christmas cards, and every kind of card which bears a pictorial illustration.

The first day cover below only contained a cardboard stuffer.

The cover was examined by a censor who only found a plain piece of cardboard inside the envelope. In order to avoid charges of pilfering, memorandum P.C. 12 was enclosed in the envelope advising the addressee of the lack of contents. Additional instructions were provided such as contacting the sender to determine if the article had been enclosed. 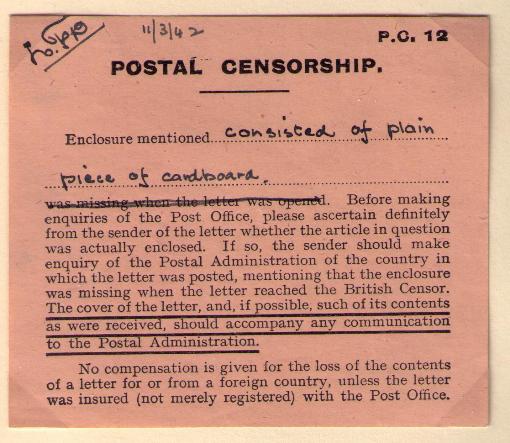 Printed matter and postage stamps to certain countries could be dispatched only by those possessing the necessary Permit. 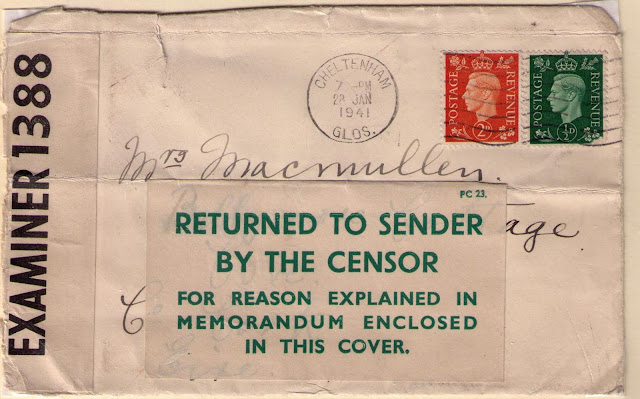 Cheltenham to Cove, Ireland, January 22, 1941
Returned because a permit was required to dispatch the letter 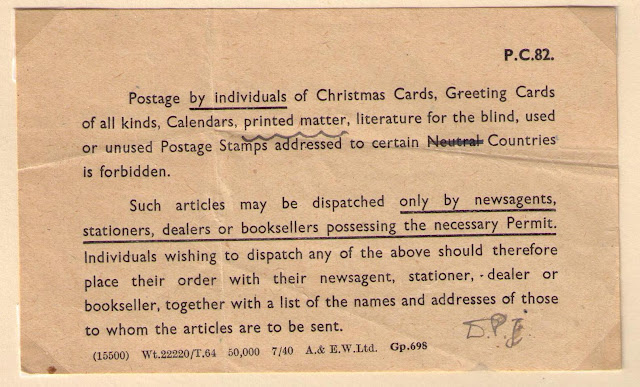 Postage by individuals of Christmas Cards, Greeting Cards of all kinds, Calendars, printed matter, literature for the blind, used or unused Postage Stamps addressed to certain Neutral countries is forbidden.
Such articles may be dispatched only by newsagents, stationers, dealers or booksellers possessing the necessary Permit. Individuals wishing to dispatch any of the above should therefore place their order with their newsagent, stationer, dealer or bookseller, together with a list of the names and addresses of those to whom the articles are to be sent.
Note: The censor struck out 'Neutral'

Re-used envelopes could not be used for despatch to certain countries. 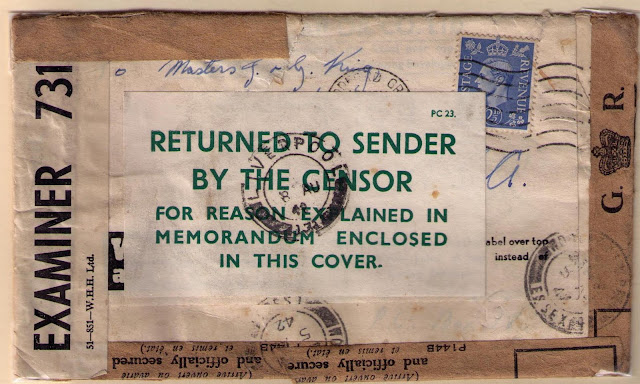 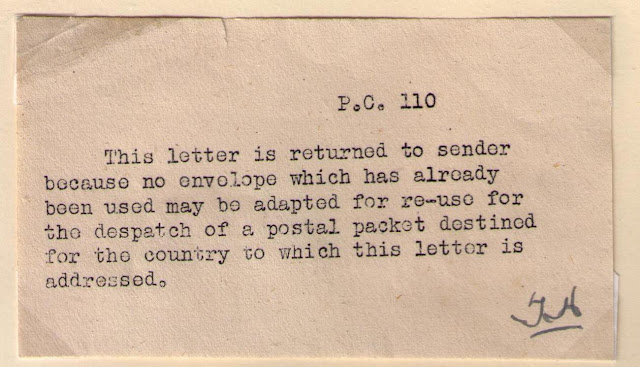 This letter is returned to sender because no envelope which has already been used may be adapted for re-use for the despatch of a postal packet destined for the country to which this letter is addressed.

The censor may have objected to the use of the 'Officially Secure' tape to reinforce the re-used envelope.
Posted by philcovex at 6:06 PM